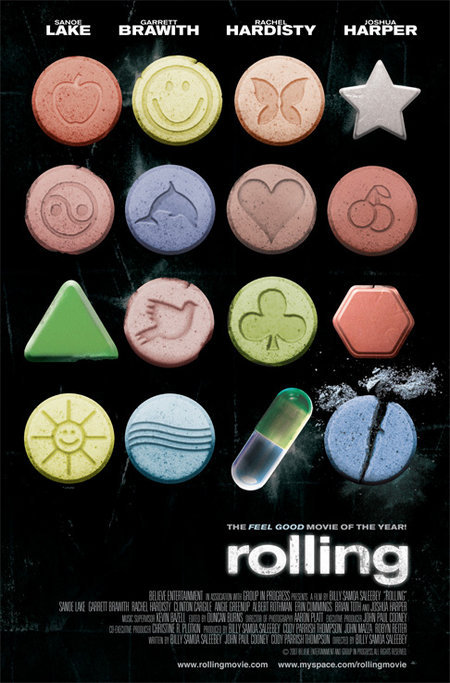 Rolling is a turbulent journey that takes a tough yet entertaining look at this unique drug phenomenon. With the pace and style of a documentary, Rolling captures the essence of Ecstasy culture, exposing the delicate balance of relationships and responsibilities with chasing this drug-induced euphoria.
—Believe Entertainment

This was my first feature film as Costume Designer. What a movie to start out with!! From Day 1, I knew I was meant to be a Costume Designer. I have told many a story from this film. I am best friends with the Writer/Producer/Actor Cody Parrish Thompson, and am best friends with the lead actor, Garrett Brawith, and remain close friends with Director/Writer/Producer Billy Saleeby and Writer/Producers John Cooney and Robyn Reiter. I was taught how to breakdown scripts by script supervisor John Mazza. I had a few hurdles to conquer on this film set, from the previous Costume Designer disappearing with ALL the costumes (YES that happened!!) meaning I had to create all the looks as I met each actor on their first day of filming to being the one and only person in my department, the rave scene was crazy hectic, I think I napped after everyone was dressed, which led to my one and only 25 hour day. The rooftop scene HAD to happen, when you see Garrett and Sanoe on the rooftop in downtown LA, it was worth it. It was on this set that I figured out how to get that horrible red dyed chinese sweet and sour sauce out of a blouse, jeans and reset during my lunch break. HAHA I recall sitting with makeup artist, Alex Noble, and just picked up one of these stickey red balls of yum, and paused, I looked at him, we both knew what I was thinking, then the knock-knock-knock on the trailer door, I knew it. It happened. Christine Cowden had dropped the red stickiness on her blouse and it landed, rolled on her pants, and she stood up and wiped it off her blouse and pants before everyone stopped and raced to get me. Dawn dish soap with hot water, in a spray bottle, jet-sprayed from the backside of the blouse, the red ooze sprayed out easily and then I just had to dry it.

We filmed Rolling in 2004, this article just came out: