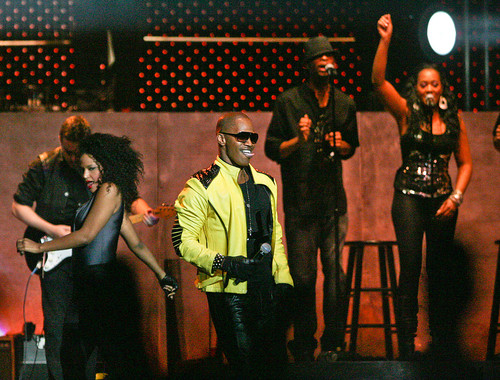 This one was fun. I had just finished re-creating costumes for the BET Award: Honoring Michael Jackson. And Jamie’s crew liked me, and when this alteration guy couldn’t join him on his tour, they asked me. Of course I said yes.

They sent a car and away I went to Chicago. No idea that I was about to join the music tour, going to a few cities. What a crazy few days I tell you!! I was even invited to his birthday party and celebrated with him and his family at their family farm. Such a honour. I then flew back to LA get the jacket made. I even made it to the concert in Vancouver, he pretends to toss it out in the crowd, I gasped, and then he jokes about how much it cost to get a custom jacket. har har